This content was paid for by Bayer AG and produced in partnership with the Financial Times Commercial department.

Farming’s grand challenge: how to feed the world sustainably

With 10 billion mouths to feed by 2050, global agriculture must transform itself through innovation and digital technology – and help to build a carbon-neutral future for the planet.

It is hard to understate the challenges the world faces. Emerging from the throes of the pandemic, global governments must grapple with a climate crisis whose signs are everywhere marked by weather extremes, be it floods, heatwaves or hurricanes.

At the centre of this mega-challenge: global agriculture. Faced with the devastating effects of climate change, the industry will need to transform in order to produce sufficient healthy, diverse and safe food for a rapidly growing world population; and it must address its own impact on the environment – more than one-quarter of the world’s greenhouse gas emissions come from agriculture, forestry, and land-use change.

At the same time, caloric demand is expected to increase by 70 per cent by 2050, while it is feared that the water supply could fall 40 per cent short of meeting global water needs by 2030. So what can be done to produce more under changing conditions and with less impact on the environment?

“Food production and environmental protection must be treated as equal parts of agriculture's grand challenge,” said David Mortensen, Professor of Weed and Applied Plant Ecology at Pennsylvania State University in a research study conducted by the university.”

This will entail a massive collaborative effort, says Liam Condon, President of Bayer’s Crop Science Division. “It will involve all sectors of the industry working together to accelerate innovation, develop business models that reward sustainability, and put data and insights at farmers’ fingertips with cutting-edge digital tools,” he says.

We’ve only got nine harvests left till 2030, so we’ve really got to move fast.

Liam Condon on the ambitious timeline of the Paris Agreement

The agriculture industry has some track record on this. For instance, the adoption of insect-resistant and herbicide tolerant crops – developed with the help of biotech – has facilitated important cuts in fuel use and tillage changes, resulting in a significant reduction in the release of greenhouse gas emissions. In 2018, this was put at the equivalent to removing 15.3 million cars from the roads.

“Agriculture can meet this challenge through ground-breaking innovation – and not only feed a growing population, but also be part of the solution to climate change,” says Condon. But while Bayer invests heavily in its own research and development – its annual Crop Science R&D budget is two billion euros, the largest in agriculture – unlocking the necessary scale of innovation must be a collective effort.

As such, Bayer is partnering with start-ups, established companies and academia to realise the potential of emerging technologies in tackling agriculture’s grand challenge. Through Bayer’s investment arm Leaps by Bayer, a joint venture with Ginkgo Bioworks is using synthetic biology to engineer microbes that can provide plants with biological nitrogen fertiliser, decreasing the environmental impact of agriculture. 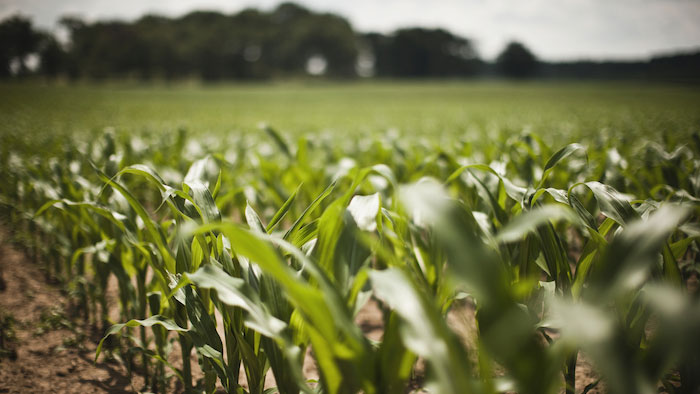 Vertical farming is another solution with promise to transform sustainable methods of growing fruit and vegetables. A single vertical farm can grow four hectares – roughly five Olympic-size swimming pools – worth of food on less than half a hectare of land, making it ideal for urban areas and helping preserve more space for biodiversity. There are 2.2 million square feet of indoor farms worldwide, but that is predicted to increase almost tenfold to 22 million square feet within the next five years. Bayer has collaborated with investment company Temasek to form Unfold, a company whose focus is to develop vegetable seeds for vertical farming with optimised quality, efficiency and sustainability.

While technological innovations undoubtedly have the potential to improve agricultural practices and make them fit for a carbon-neutral future, farmers are the ‘beating heart’ of the industry and their cooperation is crucial. Farmers are stewards of their land and already use climate-smart practices like cover crops and no-till farming, which helps the soil retain water and boosts soil health. And soil is one of the most effective ways to sequester carbon.

Traditionally, farmers have been rewarded solely for the crops they produce, but that is changing. In the US, the new, Biden administration wants to steer $30 billion in government farm aid money to pay farmers to implement sustainable practices and capture carbon in their soil. The movement has seen increasing support from private companies too. Bayer introduced a Carbon Initiative programme in the US and Brazil last year, making them the first company to take a science-based, transparent and collaborative approach to rewarding farmers for adopting climate-smart practices that help sequester carbon in the soil.

We must transform as an industry to keep up with an ever-changing world, and that requires creativity, perseverance and strong partnerships.

Meanwhile in Europe, the World Economic Forum CEO Action Group has launched the European Carbon Farming Coalition aimed at enabling a decarbonised European food system. As Liam Condon of Bayer points out, building climate-smart solutions in Europe requires a science-driven, on-farm carbon accounting framework. “That’s the only way that we can track that we’re making progress.” Condon emphasises that is also vital to incentivise farmers to be part of the solution and to better educate consumers about the climate footprint of their food choices.

Powering the solutions that can help build a decarbonised food system is data science. Farmers can gain a better understanding of their land by harnessing data from field sensors, satellites and smart farm machinery. This enables them to stay one step ahead by identifying and addressing problems before they take hold. Digital tools like Climate FieldView™ can help farmers to grow as efficiently and in as environmentally friendly a way as possible by ensuring the right amount of the right product in the right place at the right time – and thus preserving resources and reducing emissions.

Such connectivity, if implemented successfully, could unlock $500 billion in additional value to the global GDP by 2030, according to research by consulting firm McKinsey & Company. “We must transform as an industry to keep up with an ever-changing world,” concludes Condon, “and that requires creativity, perseverance and strong partnerships.”

The Bio Revolution: the dawning of a new era

The Bio Revolution has the potential to help address some of the most critical global challenges, from climate change to pandemics, chronic diseases, and worldwide food security.

How innovation and collaboration can solve the world’s health challenges

The experience of Covid-19 shows that the medicine of tomorrow will be based on both individual research and global collaboration across pharma and biotech.

Now is the time to invest in self-care

The Covid-19 pandemic has led millions of people to focus more closely on their health – and the science of everyday health is here to help.